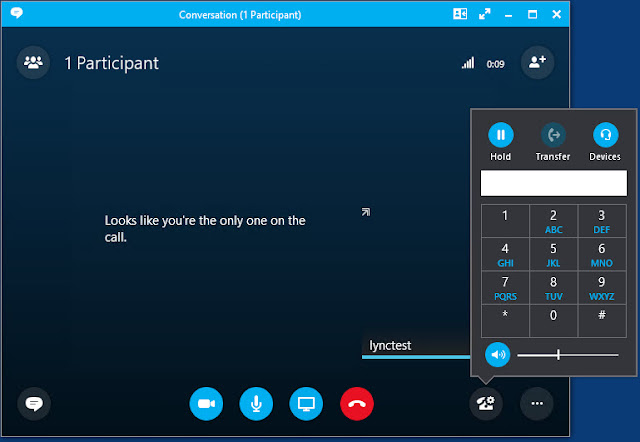 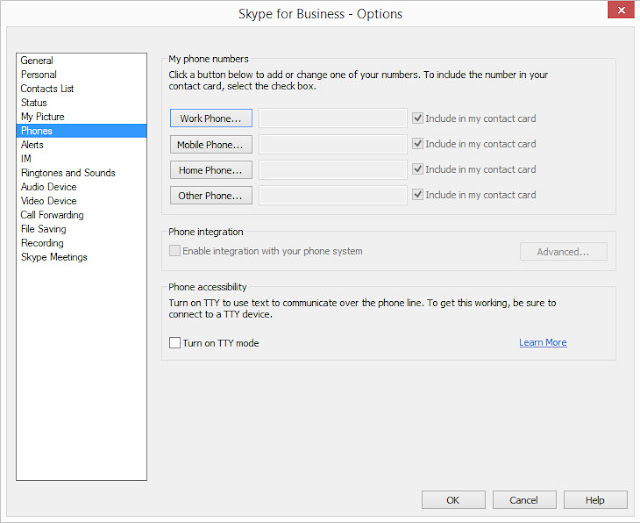 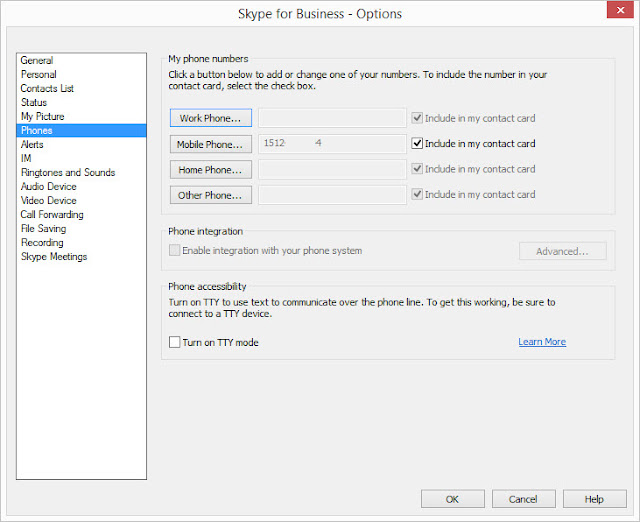 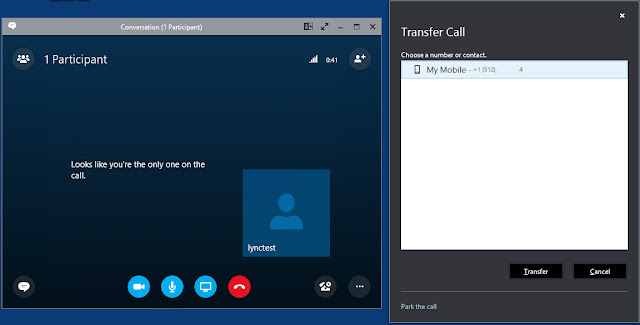 In order to transfer conference calls to another phone, the phone number must be associated with the user’s account either by one of the telephone fields in AD, or by configuring the number within the client itself.
Posted by Martin Bauer at 9:10 AM No comments:

After working on an issue for about half of a year now and finally finding a workaround for it I wanted to share it with anyone else who might also be having the same issue. Currently there is a known bug within the Skype for Business UI that does not allow users to transfer calls to other phone numbers or voicemail listed on someone’s contact card.

For example, if I was to receive a call, and wanted to transfer the call directly to one of my co-worker’s voice mail, normally you would initiate a transfer, search for the recipient, and right click their name to get a list of alternate call options from their contact card: 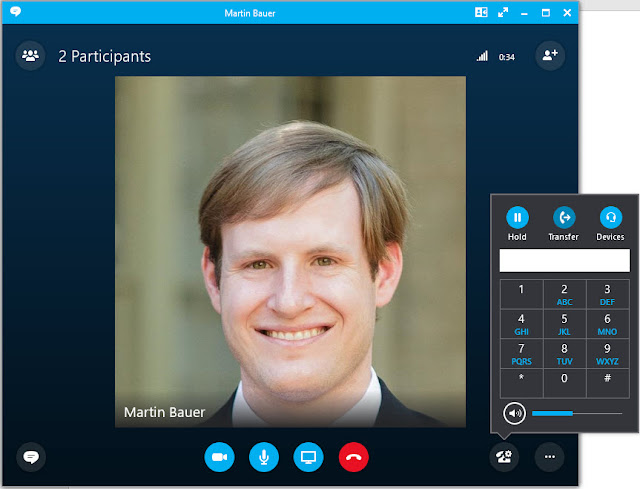 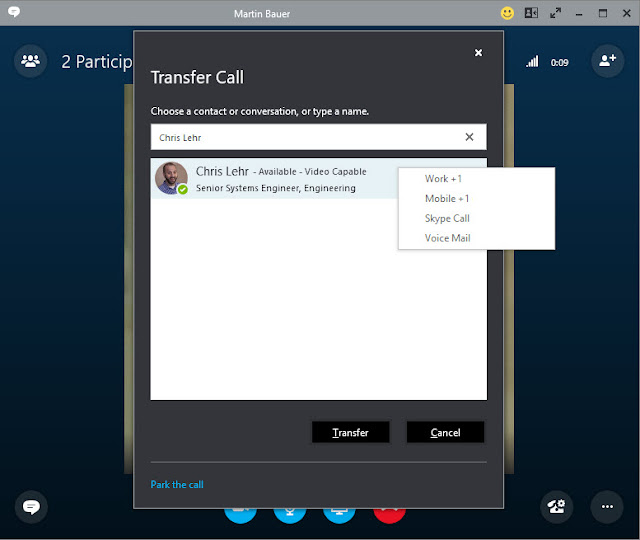 When you select Voice Mail or any other number listed the client does nothing.

A workaround for this issue is to force the Lync 2013 UI for the user with a client policy. Then this functionality still works: 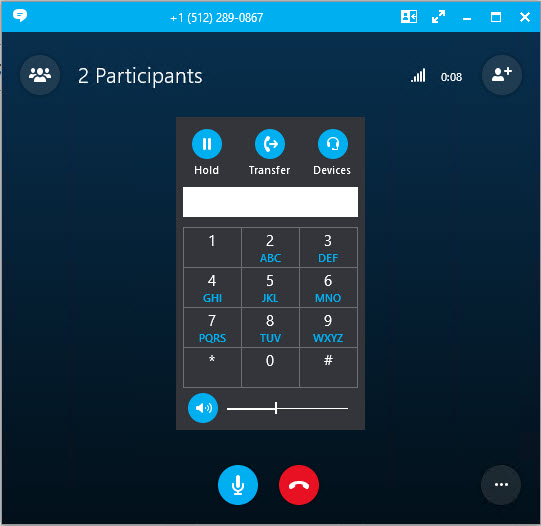 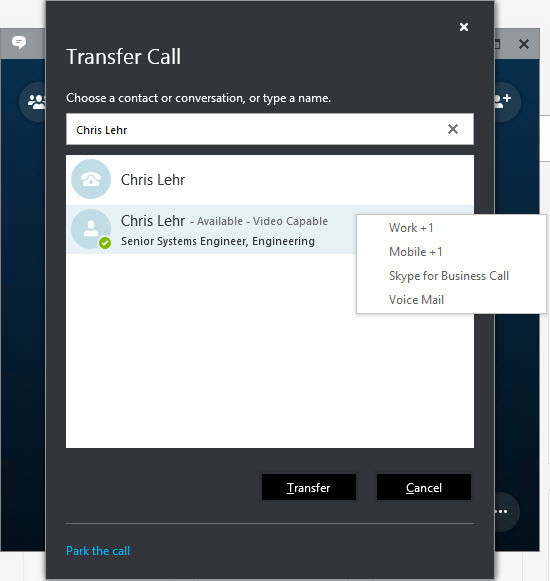 I currently have a Microsoft Premier ticket open and I will update this post once the fix has been published.

UPDATE: This has been addressed with the February 2016 client CU:
https://support.microsoft.com/en-us/kb/3114732
Posted by Martin Bauer at 11:28 AM No comments:

Email ThisBlogThis!Share to TwitterShare to FacebookShare to Pinterest
Labels: S4B

I had an interesting case today where a client who was running a Lync 2010 hybrid with O365 Skype for Business online reported that federated partners who were also using Skype for Business Online could not IM, call, screen share, or see presence.  My initial reaction was to check and see if they had configured their on-premises instance for federated domains to use the “sipfed.online.lync.com” proxy FQDN as both Phil Sharp  and our Tom Pacyk had blogged about issues with Lync 2013 when you have the domain configured as both an Edge Server and Hosted Provider. Sure enough they had a couple domains configured this way.  I used the following command to update all the domains to not specify sipfed.online.lync.com as a proxy fqdn:

I forced replication and waited 15 minutes and re-tested, still no luck. I then pulled the client logs and noticed that my messages were resulting in a 504 Server Time-Out:

The entire message did not give me much to go on:

I then decided to collect SIP and S4 traces from the edge server while attempting to IM a user on S4B online, the trace at this point also did not provide much information other than that it was being routed correctly but that once it reached O365 it would just timeout:

So federation was enabled, however it was only for specific domains, so I added the clientpartnerdomain.org to the list of allowed domains (which was empty) and then waited 30 minutes and sure enough it worked!

Make sure that if you have a hybrid configuration that your on premises allowed domains, are also listed in your O365 tenant!